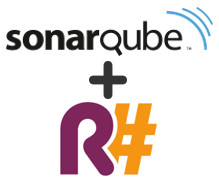 Update 2014-02-06: The SonarQube .NET ReSharper plugin has been released. See my release announcement. Since my last post announcing my SonarQube plugin, it has been accepted into the SonarQube Community plugins, including hosting of documentation, issue tracking, and builds on the SonarSource servers, and moving the code into the SonarCommunity GitHub repository, with a path for eventual inclusion in the SonarQube Update Center for easy distribution to users.

Before I open the gates and push a formal release to the public, I'd like to get some beta testers to use the plugin and work out any rough edges. If you're using SonarQube for your .Net-based projects, I'd love to have you as an early adopter and get your feedback.

The basic idea is this: The good folks at JetBrains have released a commandline-based tool (called "InspectCode") allowing users to run ReSharper code analysis outside of Visual Studio and generate an XML-based file listing the various issues it detected in your codebase. Oh, and it's free!

I felt this lined up very well with SonarQube, and wrote a SonarQube plugin to (optionally) execute the ReSharper analysis and consume the results, publishing them into SonarQube as Issues, allowing users to take advantage of the management, planning, reporting, etc, features of SonarQube to manage their code quality and technical debt.

What You Can Expect To See

Will turn into this in SonarQube:

How To Get Started

For this beta, I'm assuming you're already a SonarQube user and have successfully configured analysis for your .Net solutions. If that's not the case, take a look at my post on setting up SonarQube analysis for C# projects.

The official documentation for installing this plugin can be found on the SonarQube Wiki page for this plugin, which I'm still building out, and will change over time to reflect the current state of things. For now, here's the process:

Download resharper EAP and run a local analysis First, make sure the InspectCode tool is working for you. Download the ReSharper Command Line Tools (they come as a .zip file) and extract them into the folder of your choosing. For the purpose of this posting, I'm assuming you used C:\jetbrains-commandline-tools\.

Open a command prompt and run inspectcode.exe /help. You should see a usage statements printed to the console.

Now change into the folder with your VS Solution file and run the command c:\jetbrains-commandline-tools\inspectcode.exe /output=resharper-results.xml YourSolutionFile.sln

Warning: This may take a very long time to run, possibly a couple hours for very large projects. I would suggest starting with a small project and maybe grabbing some lunch.

One this completes, you should have a resharper-results.xml file in your solution folder, which will look a little like this:

If that all works, then you're ready to start using the plugin.

A Note About Rule Severity

ReSharper users a four-tier severity (plus a "Do Not Show" option), while SonarQube uses a five-tier system. I have mapped the ReSharper values like this:

While some of the ReSharper rules are marked as Do Not Show by default, the plugin maps them to Info so that you can modify their visibility via the Quality Profile. If you want them to not show, disable the rules in the Quality Profile. You can, of course, change any of these levels for any rule using the Quality Profile, and I fully expect most people will want to downgrade a lot of the Critical rules to Major and a lot of Info to be turned off.

Reuse Report vs Run During Analysis

The ReSharper analysis can be very time consuming for large solutions with many projects, sometime taking multiple hours to run if the cache has to be rebuilt, so I would suggest users favor the reuseReport mode when possible. This reduces the number of times the analysis is executed, since running it during the sonar-runner will analyze each project separately, adding significant analysis time, even with heavy caching in the ReSharper tool.

To use the reuseReport option you'll need to use the inspectcode.exe utility to analyze your solution before executing sonar-runner. There are several command line options for the tool, but at minimum, you’ll need this:

Where -o=resharper-results.xml will write the results into the file name you provide. Note: by default (without the -o argument), inspectcode will write the file to the temp directory. You’ll need this file to provide to the plugin.

The amount of time required to run the inspectcode analyzer and import the results into SonarQube can vary based on several factors. Here is some representative data to give you some guidance on how long it will take, based on two actual projects I'm analyzing.

All cases had an existing ReSharper cache. Excludes unsupported project types, such as WiX (installer) projects. Includes only the .NET ReSharper plugin and the base C# plugins (ie: does not include FxCop, Gallio/Unit Tests, etc). Timings are based on running within a TeamCity CI build on a decently powerful server. Obviously, your times will vary and these represent only a guidepost for how much variation can happen between runs.

The ReSharper command line tools are fairly new and still have a few kinks to work out. I would suggest always using the newest possible version, including new EAP builds of 8.1 while it is still in development.

From one run to the next, you may get a different list of rule violations from ReSharper, even without code changes. This means you will have violations come and go in SonarQube without the underlying issue actually being addressed. In my tests, for a large project like the Windows Azure .net library, I saw a 4% difference (~430 rules delta on ~12,000 total)

With the 8.1 EAP builds, JetBrains has added a commandline switch to inspectcode to dump the list of possible issuetypes that could be reported. There are a couple of data issues in that output, which I have worked around in the plugin:

SonarQube requires that the rule database be populated up front, at server start. ReSharper provides a list of possible violation types for their tool via the /dumpIssuesTypes argument, and I've populated the SonarQube rule repository using these values. However, as new versions come out, or you add your own ReSharper plugins to generate new IssueTypes, it’s possible that you will have violations in your code that the plugin did not know about when the server started, so cannot import into SonarQube appropriately. When the plugin comes across one of these, it will write a log statement (to the runner’s log) and generate a "Sonar.UnknownIssueType" violation with instructions on how to add the rule information to the 'ReSharper custom rules' property in the Settings UI. After adding that setting and restarting SonarQube, future analysis runs will support those IssueTypes.

While the ReSharper tools support the full .Net stack, including .xaml and other file types, The sonar-dotnet API does not currently support more than one language (C# or VB.net) for a given project. For .xaml and other files, the plugin attempts to report the violation against the file, but they may end up attached to the project instead. In either case, the source code for the .xaml or other unsupported file type will not be imported into SonarQube.

There are a handful of things I want to see before I release version 1.0, which will go out in the Update Center for general public consumption:

Other features I'm hoping to include, but are not guaranteed:

I am not associated with JetBrains in any way, aside from being a big fan of many of their products. I have, however, received free licenses to JetBrains products (ReSharper and dotPeek) over the years via raffles over the years at the Chicago Alt.Net Users Group, which is sponsored by JetBrains.