A Year With The Nest Thermostat 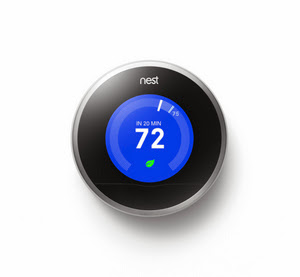 A year ago, I purchased and installed the Nest Learning Thermostat (version 2) in my home, replacing my existing programmable model. This was a bit of an investment at $250 (although I got a $30 rebate from my gas company), but I made some assumptions about the energy savings and figured it would pay for itself after about 4 years... and there was a world of potential for what it can do.

Now that it's been a full year since I installed the Nest I thought I'd reflect back on the experience. While I am still very happy with it, the actual energy savings, if any, are difficult to quantify. Just looking at the raw utility numbers, it doesn't appear to have made much difference, but there are soooo many other factors at play, that I can't say for sure.

However, there are a LOT of things to like about the Nest and I am still very happy with it.

In this post, I'll share some details about my energy usage compared to pre-Nest usage, and some of the reasons why I think the device was still a good purchase.

Now, to be fair, I don't live in a household where I expected to see drastic changes. For starters, my wife and son are home during the day, so there's no set period where the house is always empty and the HVAC can be turned off completely. Instead, it's ad-hoc periods that happen infrequently. Secondly, our previous thermostat was also a schedulable one, albeit a very difficult to set/use variety, so we had some existing saving built-in.

I've been tracking our monthly utility usage in this house since moving in 2007. I installed the Nest at the end of Nov 2012. In the below graphs, I've plotted the average daily consumption (total monthly units/number of days in billing period) for the Electric (KWh) and Gas (Therms). I've also added the temperature readings (from weatherunderground.com)

A note: the Gas readings are only taken every other month, with estimates (or readings submitted by me) in the off months. The electric readings were also every other month during the winter until this last year when a smart grid was installed in our city. It now takes readings every 15 mins, but the granular usage data is not yet available for customers.

Below are some of the Nest's features which I found useful (and one I want but isn't yet available to me). The culmination of these are why I feel the Nest would still be worth the cost even if I never recovered the money via energy savings.

The Nest allows you to run the fan on your central air system in order to circulate air throughout the house. The layout of my house, a split-level, is such that cold air settles to the lower floor and hot air to the upper. This results in a very cold TV room in the winter and a very hot bedroom in the summer.

In the past, we've put box fans at the bottom of the stairs in order to recirculate the air, but they were very loud and in the way. By using the Nest's fan timer feature, I can have the HVAC system circulate the air through the duct works, which results in a much quieter and efficient system. During the extreme temperature months, I set it to run 15 minutes out of the hour, and that results in a much more comfortable environment. This also has the side effect of running the air through the A/C filter much more frequently, which is a big bonus in our house where my son and I suffer from pollen allergies.

Here's a cheesy diagram... I mean, an artist's interpretation of what I just described.

Auto-away is the feature of Nest where it detects that you have left the house and stops heating and cooling until you return. You set min/max temps so that it never gets too hot/cold while you're away (especially helpful if you have pets), but you're not paying to cool and empty house. It uses a motion sensor in the Nest to track when you've walked by, and during the learning phase (the first several weeks after install), it determines how often it usually sees you during the times you're home, and if it doesn't see you for a period longer (like, an hour longer) than it normally would have, it will go into auto-away mode.

As soon as you come home and walk past the Nest, it will kick back on and return the temps back to their normal range. Want it to already be that temp when you get home? Just use the smartphone app or webpage to tell the Nest to leave Away mode and start cooling/heating right now.

A "Humidistat" is the thermostat equivalent for a whole-home humidifier. It generally has an external sensor that reads the current humidity levels of the outside air, as well as a built-in sensor for the inside air. When the humidity inside is too low, such as in the winter when the heater is drying out the air, it will evaporate water into the hot air leaving the furnace and into the house.

In our case, the old humidistat had two major issues: 1. The external sensor was installed right next to the exhaust vent of our clothes dryer, so when the dryer was running and spewing hot, moist air out the vent, it would blow directly at the humidifier sensor. 2. The humidistat control just had a knob with 0 - 4 to set the humidity level. It was just a best-guess as to what the actual humidity levels would be.

Now, connecting the Nest to the humidifier was not a straight-forward process. Humidistats come in two types, which basically comes down to 1-wire or 2-wire controls. If yours only uses 1 wire, good news, you can easily and quickly hook it up to the Nest. But most utilize 2 wires, much like a light switch, where a low voltage signal travels up one wire, the humidistat acts as a switch, closing the circuit for the voltage to travel down the second wire back to the humidifier to signal it should turn on. So in order to use the Nest, which only has 1 wire to control the humidifier, you must install a relay circuit, which, if done wrong, can damage your HVAC main board, your Nest and your humidifier -- so Nest asks that you have a professional do the work. However, I am comfortable doing that kind of wiring and was able to install the relay and get the Nest hooked up on my own.

Ease of use / Ease of install

I won't get into this much, because half the Internet is talking about these. But just to say the installation of the Nest is a breeze! They make it very easy. In fact, the hardest part for me was removing the old thermostat, which had been effectively glued to the wall with coats of paint.

The user interface on the device itself is very intuitive and easy to use. Programming is as simple as just setting the temp by rotating clockwise or counter-clockwise.

And the smartphone app lets do some of the more advanced stuff with easy as well, such as seeing your usage history and modifying the programmed schedule. This is doable on the Nest itself, but the UI on the phone makes it simpler. Oh, and you can use the phone app to do everything when your away from the house.

Ability to have heat and cool mode at the same time

I live in the Chicago area, and there are certain times of the year when the temperature shifts rapidly back and forth between hot and cold. One day, it might be 85°F outside, then the next night, 32°F. Most thermostats let you run in "heat" or "cool" mode (furnace or AC), but the Nest actually lets you have both enabled at the same time. In this mode, you set an upper and lower temp, and the Nest will keep your house between those temps. So an upper limit of 75 and a lower of 64 and we're all set for the rapid swings without needing to reset anything.

Warning: Running your A/C condenser when it's cold outside can damage it, so once the outside temps reach the point where the Nest is no longer cooling, I'll switch to just "heat" mode to ensure I don't accidentally kick on the A/C.

Airwave (use the already cool coils)

The Nest, when in cooling mode, can learn how long your cooling coils stay cold after the A/C compressor is turned off. Using this knowledge, it will continue to run the fan over the coils after turning off the energy-hungry compressor, allowing it to turn off the A/C compressor a few minutes earlier and still reach the desired air temperature. This is the Airwave feature and is just another way it saves energy.

The Nest app, and the website, provide usage history details for the last 10 days. Initially, it shows total time that the A/C or furnace ran for each day along with a little icon showing why the energy usage for that day was higher then the weekly average (more on that in a sec.). If you click on a day, you see the specific minutes each ran, as well as when the temperature settings changed (manually or via schedule) and when the system went into away mode. 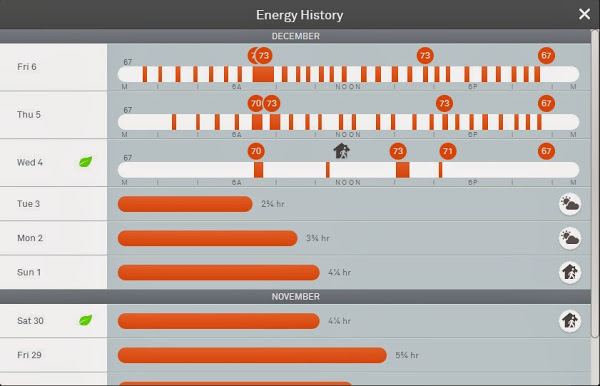 There are (at least) four little icons of note as well:

The Nest went into "Away" mode.

You adjusted the temperature, causing more/less usage than normal.

The Nest was turned off.

There are others for some of the special modes the Nest can use -- such as "Rush Hour" (if your utility company participates in the Rush Hour Rewards program, which mine does not), or if the Sunblock feature is utilized (which detects if your Nest is in direct sunlight and adjusts it's temp calculations to compensate).

Since the Nest collects and generates a LOT of data I am very interested in (as you can tell from the fact I have my utility usage details from the last 7 years), as a software developer I was really hoping that they would allow me to have programmatic access to that data, as well as my energy history. Unfortunately, that is not the case ... at least, not yet. They announced earlier this year that they are going to have an API and were allowing early partners access, but it's not open to the general public, and it's not clear that it ever will be (might require you to be a "partner" company).

I am a fan, and I think for many (most?) households, the Nest will end up saving money -- possibly lots of money. How much money depends on how often you're not at home and what temperatures you set for your home. I'm looking forward to seeing what else comes from Nest -- the Nest Protect looks interesting, especially since it links with the Nest Thermostat, but I'm not ready to pull the trigger on it yet ... just don't see the ROI on that one.